How Extreme can Hyperconverged go?

Hyperconvergence has today emerged as a rightful contender to rein in former data centre expansion madness.  It’s growth has been so dramatic and influential of late that Gartner has opened the doors to its growing market dominance, re-alligning infrastructure segmentation with a new category, the 2018 Gartner Magic Quadrant for Hyperconverged.

Easy to plot market growth and popularity when you also consider that the use case for hyperconvergence has dramatically expanded from the original VDI intention cited five years ago. To give you a snapshot of current use case expansion, last week we ran a quick social media poll with the results mirroring the use cases that we are seeing on the ground for hyperconverged adoption. In our poll results below, remote sites and branch offices remain an obvious winner for virtual SANs. VDI remains strong too, allowing admins to logically assign more horsepower as VDI users grow. But, today trust has grown to such an extent that we see the fastest growing use case coming from logical infrastructure consolidation (68%), and stopping the data centre sprawl. 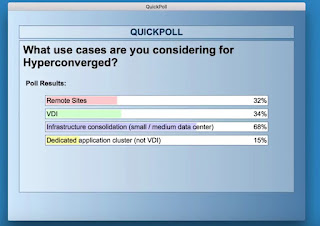 So has maturity for hyperconverged now reached such a threshold that you can now realistically and credibly stretch it to run your Tier 1 apps and databases? Our local poll illustrated just 15% are currently considering this as a use case. But consider had we run the same poll the same time last year, we predict less than 2% would have had this vision. So why are databases now emerging as a contender for hosting in a hyperconverged infrastructure?
Traditionally the primary challenge that critical apps and databases pose in a hyperconverged environment is that of restricted I/O and bottlenecks when you scale up and maximise hyperconverged nodes to meet Tier 1 demands for performance and processing.
Can you overcome this threshold? In short, yes, but it takes a niche, focused approach and only DataCore within Gartner’s Magic Quadrant on Hyperconverged is a vendor identified that offers a technology called Parallel IO that allows hyperconverged environments unparalleled ability to leverage all available I/O horsepower across all nodes to process demanding transactions. In essence, because Parallel I/O enables users to process multiple I/Os in tandem or parallel, they are no longer hampered by the speed of slowest serial transaction.
On the ground, the effect of hyperconvergence running tier one apps is that users can make underlying use of the hardware in just a two node configuration, with geographically dispersed, synchronously mirrored clusters with a single node in each location.
To see if hyperconverged could lower your overheads and increase process performance and productivity to meet your digital transformation needs, consider if the following benefits would be applicable to you and then request a 15 minute live demo and as your local Solutions Architects, we would be happy to show you how.
3 Consideration Takeaways of Parallel I/O within demanding Hyperconverged Environments. Question if you need :-
1.       Far more efficient nodes in the hyperconverged cluster that can service the most demanding apps
2.       A need for far fewer  hyperconverged nodes to reduce complexity and cost
3.       Extreme database performance gained via Parallel I/O and validated by the independent SPC results that documents Parallel I/O as having the lowest latency in milliseconds (by a factor of 3 compared to the No 2 rival)

Garry Carpenter is a Senior Solutions Architect at DataCore Software with over 25 years of experience in the storage industry. When Garry is not doing his day job, he can be found in his workshop, tinkering with one of his many cars and motorcycles. Or, at the track with his family run race car.

Contributed by George Teixeira, President and CEO, DataCore Software
In every company’s life there are inflection points that create new possibilities and introduce new ways to serve its customers and become an even greater force in the marketplace.  This last week, with the announcement of the Lenovo Storage DX8200D Powered by DataCore, DataCore had that kind of moment.
While this exciting announcement is the culmination of a lot of work, and there are many people to thank, it is also a new beginning.
DataCore has always been a software-only company, and in fact, the flexibility inherent in software has always been a strength. That’s still true, but we know there are customers who prefer a fast-to-deploy all-in-one hardware appliance, with everything pre-installed, configured, optimized, and validated. With the Lenovo DX8200D, they can have it.
This new turnkey appliance makes it simple to gain flexibility and reduce costs, and it’s a great fit:
The DataCore and Lenovo combined appliance includes multi-core optimizing parallel I/O software that achieved the world’s record for storage performance in terms of response times and best price-performance, according to the industry’s most respected and audited Storage Performance Council benchmark.
We’re very proud that Lenovo is leveraging our adaptive and self-tuning storage management and parallel I/O technology, experience and know-how to make it easier for the broader market to deploy software-defined storage in a simple, turnkey appliance backed by Lenovo’s one-stop shopping and support.
Whether you’re an end-user IT professional, a channel partner, or just an interested industry follower, we’d love to tell you more. Please take a moment to learn more or watch this brief video overview.

https://www.youtube.com/watch?v=VzR2nk0AOPE
Lenovo plans to offer the DX8200D as a pre-integrated appliance, which promises to greatly simplify deployment and reduce management expenses while providing a single point of support.  The latest offering in Lenovo’s SDS portfolio, it enables data centers to rapidly deploy a turnkey solution that harnesses the capabilities of existing SAN arrays.  It can optimize heterogeneous storage infrastructures, enabling them to scale as needs grow and easily replace older storage arrays. Through the centralized interface, the DX8200D provides data protection, replication, de-duplication, compression, and other enterprise storage capabilities at a much lower price point than traditional SAN arrays.

As data growth continues to outpace IT budgets, you need a brand new approach to storage. The Lenovo Storage DX8200D powered by DataCore appliance allows you to architect block and file storage for faster performance while simplifying operations. This validated, turnkey solution provides easy scalability and single pane management at a fraction of the cost of legacy systems—without trade-offs in availability, reliability or functionality. Lenovo’s global leadership and innovation includes industry-leading reliability and world-class performance for business-critical applications and cloud deployments. You can directly obtain a single point of contact for 24/7 technical assistance from Lenovo’s support organization, which is rated #1 for overall x86 server customer satisfaction.

The Register: Lenovo gets into server-based storage virtualization with DataCore

Our server, your software - let's play a SAN symphony together

Lenovo has struck a partnership with DataCore and plans to offer a Storage DX8200D appliance using DataCore software.
The two have history with their set of SPC-1 benchmark results showing how parallel IO-processing DataCore software running on simple Lenovo servers apparently equals that of multi-million dollar storage array rigs from other suppliers.
The DX8200D is a turnkey system, coming with SANsymphony software from DataCore, and Lenovo says it ships preconfigured, tested and optimised, and harnesses the capabilities of existing SAN arrays. The software virtualizes other arrays and adds their storage to the SANsymphony pool.
The server is a Lenovo x3650 M5, as used in the SPC-1 benchmark runs, and comes with predictive failure analysis and a diagnostic panel for serviceability. IT comes with Lenovo XClarity management software which automates discovery, inventory tracking, real-time monitoring, configuration, fault detection, and alert handling. 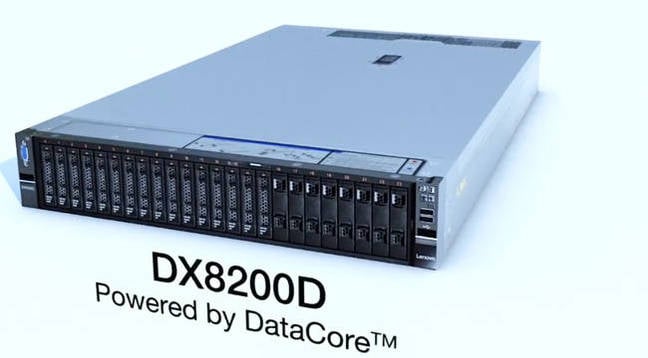 ...The SANsymphony software provides provides storage virtualization, data protection, replication, de-duplication, compression, and other enterprise storage capabilities, we’re told, at a much lower price point than traditional SAN arrays.
Lenovo cites a TechValidate research effort to claim customers can “realise lower total cost of ownership, with an up to 90 per cent decrease in time spend on storage management and support tasks, up to a 75 per cent reduction in storage costs and up to 100 per cent reduction in storage-related downtime. With a 10-fold increase in performance, data centres also can realise higher availability of mission-critical data.” There’s grist for the channel mill.

Radhika Krishnan, Lenovo’s executive director and GM for software-defined data centre and networking in its Data Centre Group, issued a quote from the cannery, saying the DX820D “is in stark contrast to traditional storage offerings, from legacy vendors, which often-times require compromises in performance, availability, reliability and functionality — limiting the ability to scale and increasing CAPEX, power, cooling and footprint costs.”

Lenovo said its support provides 24 x 7 technical assistance for both hardware and software questions...
Posted by DataCore at 14:20 7 comments:

Healthcare IT departments are challenged every day to deliver life-saving system performance while keeping costs within budget. That's why a growing number of healthcare institutions are turning to DataCore Software, a leading provider of Hyper-converged Virtual SAN, Software-Defined Storage and Adaptive Parallel I/O Software. DataCore enables these organizations to address mission-critical IT challenges while maximizing the performance, availability and utilization of IT resources - enhancing patient outcomes while keeping costs low.
"In healthcare, ultra-fast application response times are critical," said George Teixeira, president and CEO of DataCore Software. "Slow response from systems such as X-Rays, MRIs, or CAT scans, or the inability to immediately access critical patient information can have life-altering consequences, and as a result, delays are simply unacceptable."
Furthermore, with the ongoing and massive data growth from medical images, including multi-dimensional, 3D and even motion-based image formats, as well as the continuing move to electronic health records, storage requirements and the cost to manage them are also on the rise.
DataCore software delivers record-breaking performance via its Parallel I/O technology, which pairs well with Lenovo's powerful servers featuring x86-64 processors. The combination offers the industry's fastest I/O response time and the best price-performance with self-tuning features that automatically move data between spinning disks and flash based on workload priorities. An example of a healthcare customer that relies on DataCore and Lenovo is the Comprehensive Cancer Center at the University of Puerto Rico (CCCUPR) -- one of the most advanced hospitals and cancer research facilities in North America.
The Comprehensive Cancer Center at the University of Puerto Rico (CCCUPR)
CCCUPR needed a powerful, easy to operate and flexible solution to manage its critical medical records and the growing oncology imaging requirements from its Picture Archive & Communications System (PACS). Since the hospital and the research center are separated by about two miles, patient information also needed to be shared and protected from unplanned events at all times.
According to Luis M. Wilkes, director of Information Systems for CCCUPR, "The combination of DataCore and Lenovo has maximized IT infrastructure performance, availability and utilization by delivering a high availability, software-defined storage solution to support our operations. The DataCore-Lenovo solution ensures that critical health information systems, such as our PACS, are available online and on demand. Going forward, we have the flexibility to meet changing demands with DataCore software running on Lenovo and virtualizing, protecting and accelerating our systems and applications."
CCCUPR now has six Lenovo Series x3650 servers running DataCore software at the primary site. For disaster recovery, the solution includes advanced DataCore replication to two additional Lenovo Series x3650 servers at the secondary location.
A common thread among the many new healthcare organizations that have deployed DataCore is that all have done so to achieve significant gains in performance, scalability and reliability. DataCore enables users to:
The result is greater consolidation savings, better performance and higher availability for critical healthcare applications, databases, and other virtualized applications.

Distributors & Partners in the UK